The GIANTS are back in London for the 2nd annual Strongman Classic!

In fact, three of the first four athletes from the 2021 show are all in attendance, including America’s Evan “T-Rex” Singleton who lost out by just 1.5 points and will be more determined than ever to show what kind of shape he is in after his 2022 World’s Strongest Man performance was derailed by him suffering an anaphylactic reaction. 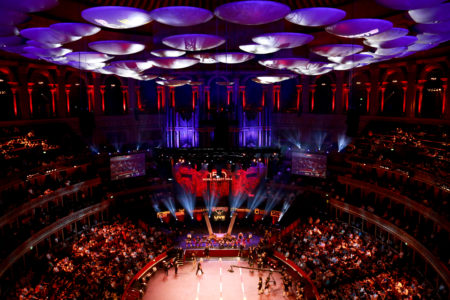 Last year the crowd were treated to a feat of strength that Giants Live co-founder, Darren Sadler, called “one of the most impressive things I’ve ever seen,” when Burkina Faso’s Cheick Sanou, or Iron Biby, as he is better known, broke Eddie “The Beast” Hall’s world record in the axle press, with a 217kg/478lb lift on his third attempt. The atmosphere in the Albert Hall that night was electric and this year promises to be no different!

England’s Mark Felix, the 56-year-old “Miracle Man” will be returning to action fresh from his record-breaking 17th appearance at World’s Strongest Man. With Hercules Hold and Farmer’s Walk on the event list, this is a show the Grenadian-born plasterer, from Blackburn, will be hoping to do well at. It’s worth remembering that Oleksii Novikov keeps a picture he had taken of himself, as a small boy, with Felix when Mark had competed in Kiev, and now he competes alongside the man who has become a legend in the sport.

From north of the border, Andy Black, a.k.a. “The Bulldozer”, will be Scotland’s sole representative. The fast-improving Glaswegian will be looking to improve on his best Giants Live finish to date, 6th place, where he has finished at Britain’s Strongest Man, earlier this year, and at both the World Tour Finals, in his home city, and at the Arnold UK, in Birmingham. 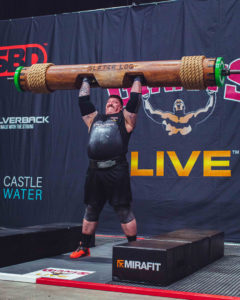 “The Bull”, Gavin Bilton will be flying the flag for Wales and is always a firm favourite with the crowd.  Gavin finished 4th in his heat at World’s Strongest Man, back in May and is still on his way back to full strength following some medical issues he was suffering. His most recent showing at the Strongman Champions League Event in Holland was promising; he finished in 3rd overall, winning the Viking press. Completing the British quartet is Sheffield’s Paul Smith, who was recently crowned UK’s Strongest Man and has a habit of punching well above his weight. In taking the title he dethroned Bilton, so the giant Welshman may be seeking revenge on the Englishman!

When it comes to athletes who can punch above their weight, look no further than USA’s Rob Kearney. Official Strongman’s Pound-for-Pound World’s Strongest Man, Kearney is a former American Log record holder at 216kg/476lb and has formerly won The Giants Live North American Open. His relatively small hands may be a hindrance in the grip events but expect to see him rip through the dumbbells and mix it with the big men in the deadlift.

Fellow American, Ken McClelland is a two-time Masters’ World’s Strongest Man. He also placed 2nd on two occasions at the same contest in 2019 and 2021, losing out to Britain’s Terry Hollands in ’19 and Zydrunas Savickas, the four-times World’s Strongest Man, in ’21. The Cedar Rapids man, at 47, is the second oldest athlete in the contest. Joining him as the fourth USA athlete is Spenser Remick, who placed 2nd at last year’s Official Strongman Games, held in Daytona Beach, Florida.

Also from North America are the two superb Canadians, Maxime Boudreault and Mitchell Hooper. Boudreault placed 3rd at the 2021 World’s Strongest Man and finished 5th this year in Sacramento, proving that he is a man to overlook at your peril. Boudreault is a fierce competitor who is strong overhead and will scrap for every point available.

His countryman, Hooper, made a big splash at World’s, qualifying for the final, which was a surprise to many, and winning the opening event – the medley. Expect to see him feature highly in the Farmer’s Walk, as well as the Axle Deadlift; “The Moose,” has completed a 475kg/1,047lb deadlift in competition, a feat only Eddie Hall and Hafþór Björnsson have bettered.

A strongman with Talent

Completing the field of twelve is a man who, with his singing ability, should feel right at home at The Royal Albert Hall. Australia’s Eddie Williams – a man who auditioned at both Australia’s and America’s Got Talent – will be making his first competitive appearance since the 2020 Arnold USA event in Santa Monica, California. Williams has competed at Giants Live before; he placed 6th at the 2019 North American Open in Martinsville, Indiana. As well as having a beautiful singing voice, this 400lb plus strongman is a two-time winner of Australia’s Strongest Man.

This year’s contestants will be getting proceedings underway with an historic strength discipline, with a twist. The athletes will lift in pairs and will have 75 seconds to attempt all five dumbbells which ascend in weight and must be lifted overhead in order from lightest to heaviest.

This event was first used at a Giants Live event at the 2021 Britain’s Strongest Man contest in Sheffield’s Utilita Arena. Two times World’s Strongest Man winner Tom Stoltman took the win that night, on the way to his first British title. He lifted four dumbbells in 33.76 seconds. No one managed to lift all five, will anyone finish the event at The Albert Hall?

The World Record stands, unofficially, at 153kg/338lb, by Ukraine’s Oleksii Novikov, which should make him hot favourite to win this event. However there are many superb dumbbell lifters in this field, including Evan Singleton of the USA and Canada’s Maxime Boudreault. Rob Kearney, former American record holder in the Log Press, is no slouch either and will be a man to watch closely here too. 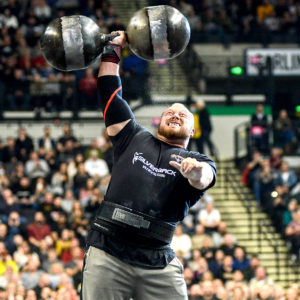 Early forms of the dumbbell have been in existence for thousands of years and were first used by the Greeks, who used “halteres” for weight training and to assist long jumping. In the last 150 years renowned strongman such as Thomas Inch and Louis Cyr helped bring the discipline back to the fore of strongman.

Mark Felix surprised many by failing to break his own world record, or even win the event, last year, such has been his dominance in this gruelling test of grip strength. The Englishman has set and re-set his won record in this event on many occasions and established a record of 92.37 seconds at the 2020 Europe’s Strongest Man. However, other athletes have been busy closing the gap, and where once Felix could almost guarantee victory in this discipline, he will now be pushed hard by the chasing pack.

Iron Biby won this event last year with a time of 75.12 seconds, less than a second ahead of Evan Singleton’s 74.36 seconds. Whilst still comfortably shy of Felix’ time, if the Miracle Man has anything less than a good grip day, he could well lose out to either man. 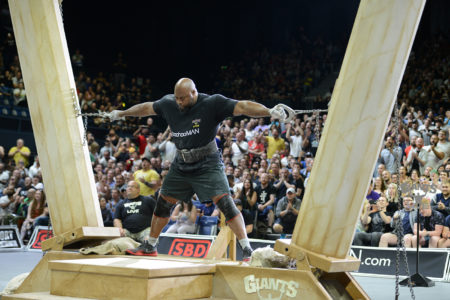 The rules of this now iconic event are brutally simple: hold a handle and chain in each hand and try to withstand being pulled apart by two gigantic, 200kg/441lb pillars, that are attached to the chains. Grip strength and the mental fortitude to withstand the growing agony are the athlete’s ally here. Footage of Felix’ first world record, set at the 2019 Giants Live Wembley event, went viral and has been watched by well over 100 million people worldwide.

Event three will see the athletes attempt the Farmer’s Walk for maximum distance, which is a much less common variation on an event which mostly sees the competitors race for time over a set distance. The course will be 15m long, with a 1.5m drop zone, in which the athletes may put down the 150kg/331lb implements, turn themselves around and then continue down the course. The strongman who achieves the biggest total distance before relinquishing his grip outside of the drop zone, will be the winner.

Speed of carry will be less crucial here than strength of grip, although the quicker a competitor moves the more ground they can cover before their grip weakens. Mark Felix will be expected to place highly due to his 13-inch hands providing him with the world’s best grip. This is an event that could easily throw up some surprises and potentially see one of the favourites lose their hold on the competition.

With their grips heavily fatigued from both the Hercules Hold and the Farmer’s Walk, as well as their arms having been pulled from their sockets, the athletes must next lift the 360kg/794lb axle from the floor as many times as possible in 60 seconds. This paired event is a Giants Live favourite and though the crowds at previous shows have seen repetition counts of eight and more, anything more than six here would be a staggering achievement.

There will be great excitement to see Mitchell Hooper in this event, following his remarkable deadlift of 475kg/1,047lb, last year. Mark Felix and Oleksii Novikov will be hard to beat in this event; Novikov is the current world record holder in the 18-inch deadlift. He successfully lifted a mind-boggling 537.5kg/1,185lbs on his way to victory at the 2020 World’s Strongest Man. Boudreault may perform less strongly here – his deadlift being one of his few weaknesses, relatively speaking. 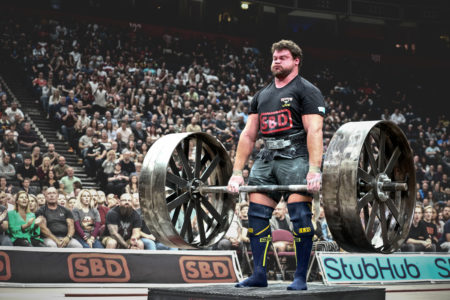 The competitors must lift the axle, locking out hips and knees, and hold the bar until they receive a down-signal from the referee. The weights must come to a dead stop before the next repetition may be attempted, hence the term “deadlift.” Bouncing of the weights is not permitted, neither is dropping the bar from the lockout position.

At the time of writing, it is still undecided which set of Atlas Stones will be used for the closing event of this year’s Strongman Classic. The “light” set comprises five stones of ascending weight, which must be lifted onto their plinths. Ranging from 100kg/220lb, to 180kg/397lb, the current world record is held By Tom Stoltman of Scotland in a blistering time of 16.01 seconds.

The heavy set has a first stone of 120kg/265lb and a massive 200kg/441lb final stone. Hafþór Björnsson has the record with these at 17.54 seconds, a time he set on his way to victory at the 2017 Europe’s Strongest Man contest in Leeds, England. As is so often the case, the stones can prove pivotal to the overall contest’s result and a slip-up by any of the top contenders could see their chances disappear.

Scotland’s Andy Black may well finish well in this event – he is a renowned stone lifter and could well take the win here. He defeated both Novikov and Singleton in this event when he won the stones at the 2021 Arnold UK, so has already proved himself in this event. 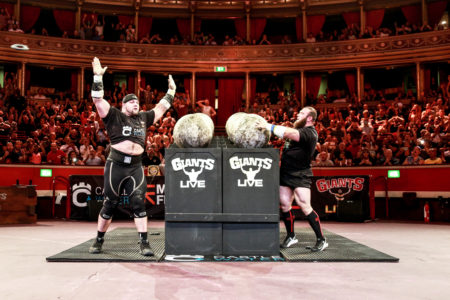 In the absence of Tom Stoltman, and in light of last season’s results, this contest really could fall to any of four or five of the competitors. Giants Live events tend to be fast-paced with little time for the athletes to recover, especially following a poor event, when the running order goes in reverse order of the previous event results. This creates different demands on the athletes and puts an emphasis on recovery ability.

Last season saw several showdowns between Evan Singleton and Oleksii Novikov and this year’s Strongman Classic could well see the pair continue from where they left-off. However, will the likes of Hooper, Boudreault or Kearney have something to say on the matter? One thing is for sure, this is a show not to be missed!

Deadlift history to be made? | Open & World Deadlift Championships 2022 PREVIEW

Novikov unstoppable at the Strongman Classic 2022 – full results and highlights!