The Giants Live 2022 season is soon to get underway with Britain’s Strongest Man on the 26th February, at the Utilita Arena, Sheffield. The traditional season opener, in the Steel City of Sheffield, is just the first instalment of a bumper 2022 season that features more live arena shows than ever before.

With much-coveted titles such as Europe’s Strongest Man, The World Deadlift Championships and The World Log Lift Challenge up for grabs, we thought we’d ask Giants Live’s newest addition to the crew, the freshly retired former Britain’s Strongest Man, Terry Hollands, his thoughts on how the season looks set to shape up and who will be most likely to strut away with the silverware.

Which up-and-coming athlete should we be looking out for? 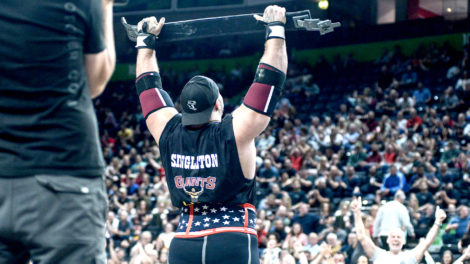 “He’s coming along at a great rate and has enormous potential,” says Hollands. “One-day shows suit him really well as he is so intense. They suit his abilities as an athlete, so I wouldn’t be surprised to see him cleaning up this year. He’ll have a tough battle going up against Tom and Oleksii, but those could be the three that really shine throughout the year.”

Singleton, whose WWE wresting name was Adam Mercer, has vowed on camera that he will win World’s Strongest Man on several occasions, and after two victories at Giants Live events last season he seems to be on the right track. As well as victories at the Arnold Classic UK and World Open, T-Rex was second at The Strongman Classic and a very close 3rd at the World Tour Finals.

As yet, the 6’ 5”, 26 stone (360lb) Singleton has been unable to fulfil the promise he has shown in one-day contests at World’s Strongest Man. Injury and loaded heats have all contributed to him not being able to progress from the heats, but Hollands believes his time will come soon.

What new shows will Giants Live be hosting this year?

There will be six shows throughout the 2022 season, with venues spanning the length and breadth of the UK. As well as return visits to Sheffield, Leeds, London and Glasgow, Giants Live will be making its first visit to the city of Cardiff for the Giants Live Open and World Deadlift Championships at the Motorpoint Arena.

Another new venue for Giants Live will be the M&S Bank Arena, Liverpool, for the World’s Strongest Nation event which pits the United Kingdom against the USA’s finest.

The strongman scene is so competitive right now that Terry Hollands doesn’t see any single athlete completely dominating but is convinced that Giants Live’s short format contests will continue to be dominated by the likes of Scotland’s Tom Stoltman, the current World’s Strongest Man and Ukraine’s Oleksii Novikov. 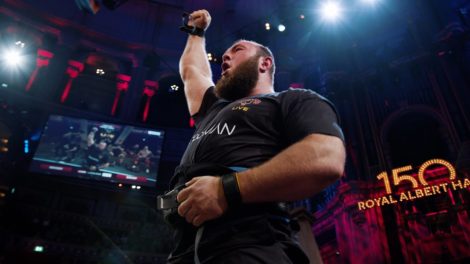 “Then you have Luke (Stoltman) and Bish (Adam Bishop) who are incredible strongmen and will be thereabouts as well. This will be the most exciting year ever.” Referring to the new venues Giants Live will be visiting this season: “It’s great that there’s some new venues to go to. I’m really looking forward to the year and excited to see what happens.”

From the sport’s inception in the late 70’s, where the competitors were drawn from a myriad of strength-related sports, strongmen have continued to get better and better each year. The modern strongman is a completely specialised and full-time athlete and Terry Hollands believes that the overall standard in the UK and across the globe has never been better. “The standard across the world is just getting better. There is now an increasingly large pool of athletes to select from, therefore we’ll see a lot of new faces emerging this year and possibly appearing at Giants Live shows.”

Can Iron Biby beat his own Log Press World Record?

On April 2nd the Giants Live Arena Tour moves to the First Direct Arena for Europe’s Strongest Man and the World Log Lift Challenge. Burkina Faso’s Iron Biby, the owner of the strongest shoulders on the planet, along with a host of the world’s finest strongmen, will be attempting to break the World Record Biby established in Glasgow last year.

The record stands at 229kg (505lb) and is held by Iron Biby, who after years of trying, finally broke Zydrunas Savickas’s stranglehold on the log world record. Biby will be gunning for not just another World Log title, but to add a kilo or two to his personal best. But does Terry Hollands consider anyone a threat to the giant African’s log lifting supremacy? 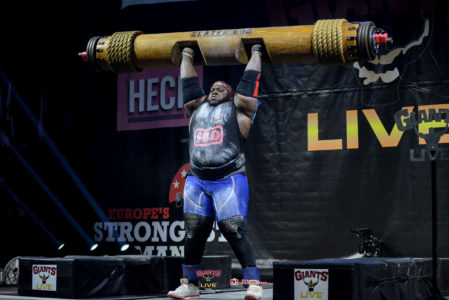 “I don’t see anyone beating him on the log,” says Hollands, “I believe that with a year’s progression he could push the record even further.” Commentating on the 6’ 3”, 205kg (450lb) Burkinabé’s now legendary overhead power, Terry added: “His shoulder strength is just unbelievable. He’s an incredible athlete when it comes to overhead pressing. He has done some of the most incredible things ever seen in terms of shoulder strength: 270k seated shoulder press! …not normal.”

However, there are a handful of men who might push Biby hard on the night. Of these, Hollands believes Bobby Thompson and Graham Hicks pose the greatest threat. “Thompson, who’s coming over, will be strong. I think he will go 220kg plus.” Which would put him in the top five all-time in competition.

One of two British men to have attempted 230kg (507lb) in recent years is Graham Hicks. “I Would love to see Hicks get fit and healthy,” states Terry. “He has had problem with his groin. I genuinely think a fit Hicks is the only one who could realistically challenge Biby.”

Can anyone deadlift 505kg in Cardiff?

The Giants Live Open & World Deadlift Championships 2022 are on Saturday 6th August, at the Motorpoint Arena, Cardiff. A prize of $50,000 is on offer to any athlete who can successfully deadlift 505kg (1113lb).

As a man who once held the strongman deadlift world record, albeit very briefly, Terry Hollands knows a thing or two about an event which is perhaps the ultimate test of brute strength. And ever since Eddie Hall successfully pulled half a tonne (500kg or 1102lb) back in 2016, the rest of the strongman community has been playing catch-up.

Hollands thinks that if anyone can do it, Ivan Makarov is the man. “If he has a good prep and nails it on the day, he has it in the locker.” Terry also suggests that last year’s attempt was not as well planned on Makarov’s part as it might have been: “He was by far the closest last year. He got it to his knees, but if he’d planned his jumps better, he might have saved more energy for the record attempt.”

Other than the mighty Makarov, Big Tel believes there’s a few more athletes with a good chance in the near future. “It would be great to see it done. There’s a few guys starting to get close. Adam Bishop got 475kg to his knees last year and he’s gunning for the world record this season.” 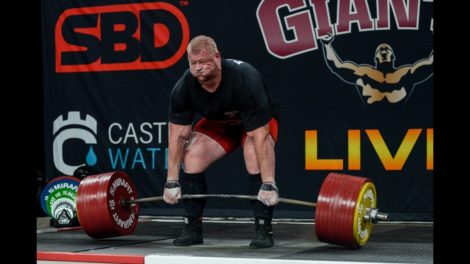 Talking of the incredible rise in the standard of deadlifting in strongman Terry is still amazed by the performances at last year’s World Open. “A year ago, only seven guys had ever pulled 1000lb, now nearly the whole line up did that at Manchester. That doubles the number of guys to ever pull 1,000lb in just one contest. It Shows the way the sport is going. 505kg will definitely go at some point. This year? I don’t know but it is definitely possible.”

With the all-round standard of athletes rising each season and more Giants Live shows than ever before, this year promises to be more exciting than ever. The current wave of British and particularly Scottish talent has huge momentum at the moment. How they will fair against the rest of the world promises to be truly enthralling.

Where and when are the Giants Live shows in 2022?