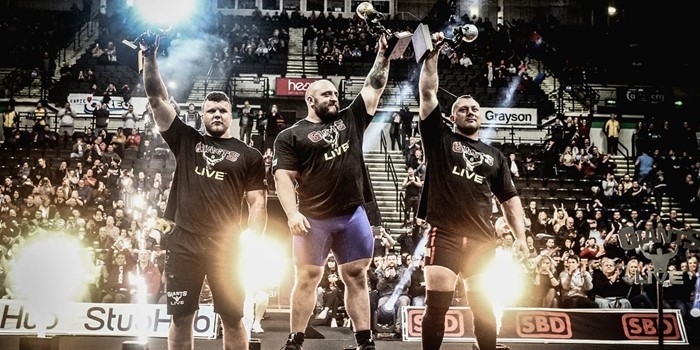 With the Beast in retirement and chasing his new movie career, the path was wide open – and the stage set - for the best of British to come forward and determine a new champ of British Strength.

At the Fly DSA Arena, Sheffield, on 19 January 2019 a crowd of 7,000 strongman fans witnessed the most hotly contested Britain’s Strongest Man we have EVER seen, with 6 or 7 guys having a real chance at taking the title. Fans and even experts of the sport had been unable to predict a clear winner in the run-up to the show – this was a contest just too close to call!

With an abundance of flames, flexing and record-smashing antics, the show featured 5 brutal events: a 150 Kilo log press for REPS; a 400 kilo Frame Carry; a 320 kilo deadlift FOR REPS on a circus strongman, Mad-Max-style axle bar; a classic loading race and, of course, the Atlas Stones to finish.

Laurence Shahlaei was a clear favourite coming into the show, but the fierce competition saw him take fifth place overall. And although Loz was looking on good form and managed to smash his own Frame Walk record of 10.1 seconds, with a 9.59 second run, it was Adam Bishop that stole the Frame Walk with a super speedy 8.28 second sprint!

In striving for greatness, our Giant athletes really do take great risks. Sheffield’s Phil Roberts had hoped to wow in his home town show, but dramatically injured his leg in the final event after losing his grip on the 160 kilo Atlas Stone. Phil, ever the showman, waved and gave a ‘thumbs up’ as the entire crowd rose to their feet to cheer in support as he was carried out on a stretcher.

Phil is recovering in hospital and we wish him all the best in his recovery! 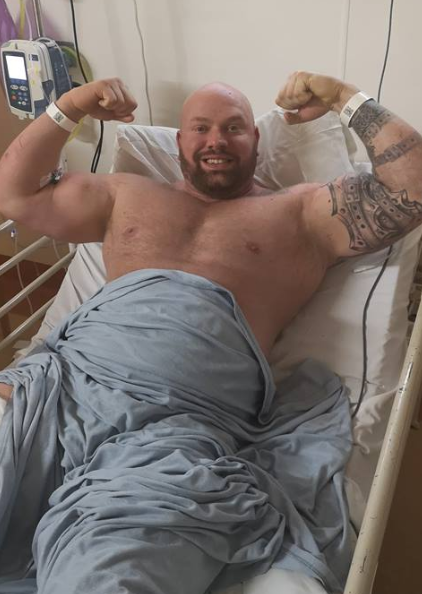 Atlas Stones for the win

With only 2.5 points in it coming into the stones, the final decider was a nail biting head-to-head between Hicks and Bishop, but it was Hicks who came through to take the win.

The podium also saw Scotland’s Tom Stoltman in third, placing just ahead of older brother, Luke, on the final scoreboard. Despite coming last in the Frame Carry, Tom had performed so well in the other events - including an astonishing 18.03 second (!!) atlas stone run – that he had enough to take the bronze trophy.

Even the Beast himself confirmed to the audience that ‘the Albatross’ is set to be the next big thing in British Strongman.

From the mouth of the Beast himself: “Tom Stoltman really is the next ‘The Beast’!”

In the end, it was a hard fought win for Hicks who was a natural successor to the Beast after being the ‘nearly man’ of Britain’s Strongest man for a number of years now.

And it is only fitting that Hicks would be standing next to old rival, Adam Bishop, on the podium. The two Giant strongmen first competed against each other 9 years ago in the under 105 kilo class.

“I was first, Adam was second”, Hicks explained. “Now it’s a repeat 9 years later in the Big Boy League!”.

There were clearly no hard feelings from Eddie as the former champ handed Hicks his trophy, saying:

“He’s been on the podium more times than I have, I think! He put his heart and soul into it, he fully deserves it and I’m 100% happy for him.”

Hicks, as humble as ever, told the crowd he wanted to prove that anyone can do it.

“Strongman is my passion but it’s still a hobby for me. I’m a working man. I hope it shows other people they can do it, too. If you want something so bad, you can go out and get it!”.

If you couldn’t make it to the show, you can watch the live stream recording only on OfficialStrongman.com.