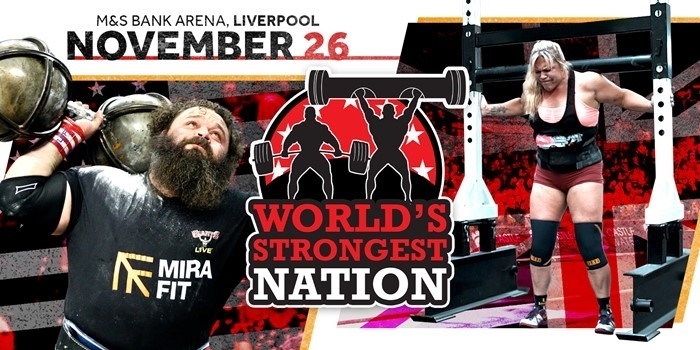 NEW FOR 2022! See the World’s Strongest Men AND Women compete in an all-new contest to decide which nation is TRULY the strongest on the planet!

Teams from USA, Europe and the UK featuring the top stars of Strongman and Strongwoman will go head-to-head at the M&S Bank Arena in Liverpool in a contest the likes of which have never been seen before!

Both individual and team tests of strength, speed and power will be awaiting the Giants in this all-new strength spectacular! Get ready to see the World’s Strongest Men and Women perform scarcely believable feats of strength- from lifting massive weights, throwing huge barrels and even carrying cars- in front of your very eyes!

With the rising popularity and emergence of some truly incredible Strongwoman talent, we’re privileged to be inviting the World’s Strongest Women to compete on the platform they truly deserve- a packed arena filled with the greatest and most passionate fans on the planet!

For the first time, the Giants Live World’s Strongest Man Arena Tour is coming to Liverpool and bringing all the adrenaline, excitement and thrill of LIVE strongman Giants Live has become world renowned for! More details will be released soon, but rest assured this will be one show you won’t want to miss!

Jaw-dropping, inspirational and larger than life - this is live strength sport and entertainment at its absolute biggest and best! There is only one World’s Strongest Man Arena Tour and this is it!

You’ve seen it on TV, now see the real thing! Nothing quite matches the adrenaline rush of seeing these real-life GIANTS carry, lift, hulk, drag and throw barely believable weights, mere feet from your seat!

Get up close and personal and shake the giant hands of the biggest Strongman and Strongwomen superstars with our VIP experience. Check out what these VIPs had to say about Giants Live!

Don’t miss your chance to see the Strongest Men and Women in the world do battle, LIVE in Liverpool- tickets are selling fast, get yours before they’re gone!

*Please note, due to the nature of the event, the line-up of stars and feats of strength at each show is always subject to change