Britain’s Strongest Man 2022 is approaching about as quickly as Tom Stoltman completing a stone run, so we thought we’d ask Big Tel, the elder statesman of British strongman, to share his thoughts and predictions on what promises to be another unmissable showdown in Sheffield!

Following his 15th consecutive World’s Strongest Man appearance in Sacramento last year, Hollands decided to hang up his knee sleeves and draw his competitive career to a close. Luckily, for fans of Terry, he’ll still be in the thick of the action at The Utilita Arena on February 26th, although this time he’ll be holding the microphone and interviewing this year’s contenders.

When is Britain’s Strongest Man 2022?

Giants Live will be hosting Britain’s Strongest Man 2022 at the Utilita Arena, Sheffield on Saturday the 26th February.

What are Terry Holland’s Achievements in Strongman?

Dartford’s Terry Holland’s is one of Britain’s most successful strongmen. The former rugby player captured the Britain’s Strongest Man title in 2007 and has appeared twice on the podium at World’s Strongest Man, placing 3rd in 2007 and 2011. He qualified for an incredible nine consecutive World Strongest Man grand finals from 2006 to 2014 and has made more appearances there than any other British athlete. 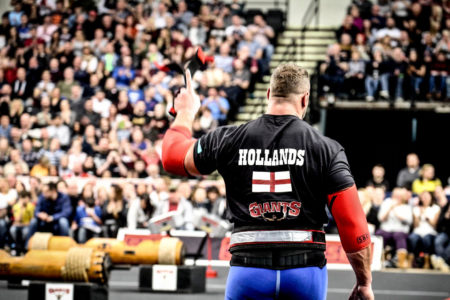 Terry had tremendous all-round strength and mobility for a man standing 2.00m (6’ 6”) and weighing in at around 180kg (400lb) at his peak. He was renowned for his prowess in truck pull and deadlift. At the 2011 World’s Strongest Man finals in Wingate, North Carolina, Terry successfully lifted 435kg (957lb) which at that time was a world record.

So when Big Tel, as he is affectionately known, decides to share his insights and thoughts ahead of what is arguably the most competitive national championship in the world, strength fans would be well advised to take heed!

Who will win Britain’s Strongest Man 2022?

Hollands believes that once this year’s five gruelling events have been completed and the chalk dust has settled, the podium spots will be occupied by the Stoltman Brothers, Tom and Luke, from north of the border, and England’s Adam Bishop.

“All three of them are world class athletes and we’re extremely lucky to have three guys of that level competing at Britain’s Strongest Man,” says Hollands. The trio all managed to reach last year’s World’s Strongest Man final, held in Sacramento, California. The younger of the Stoltman brothers, Tom, became the first Scot to ever claim the World Championship, whilst big brother Luke and Adam Bishop did the UK proud, claiming 7th and 8th places, respectively. 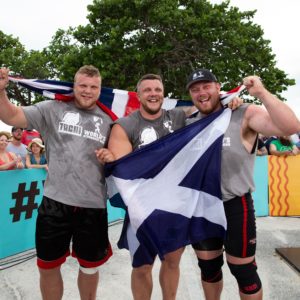 At last year’s contest, Tom added the British title to his World Strongest Man win, edging out Adam Bishop who had pipped him to the title in 2020. 2021 Europe’s Strongest Man, Luke Stoltman had to settle for fourth, losing out on a podium place to England’s Graham Hicks. Hicks, however, doesn’t feature in Holland’s top three this year.

When pushed to pick a winner, Hollands cannot see anyone defeating The Invergordon Goliath, Tom Stoltman. Older brother, Luke, is tipped to take second, with Bishop rounding out the podium spots in third. “All three of them are potential podium finishers at World’s Strongest Man, let alone Britain’s. Each of them have their stronger events and I don’t see any one of them being dominant.”

Terry sees the result going right to the wire as it has over the last two years, which have both ended in thrilling Castle Stones finales. “The slightest mistake, or any one of them having an off day could completely change the result. Ultimately, all three of them are capable of taking the win.” 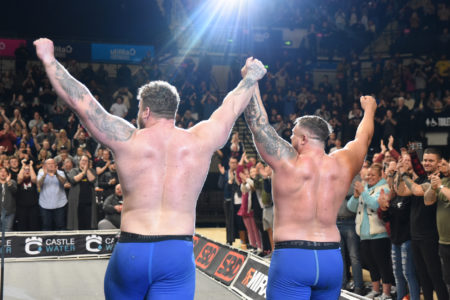 Who will be the surprise package of this year’s Britain’s Strongest Man?

Whilst the experts and pundits scratch their heads over who will occupy the winner’s podium spot, it’s often the case that an athlete who no one expects to do well emerges from the pack to give the favourites a scare.

Yorkshire’s Mark Steele is the man Terry Hollands believes will surprise many this year: “The way the events are, I think he’ll shock a lot of people. He’s very good at some of this year’s events, he’s a dark horse for a top five finish.” 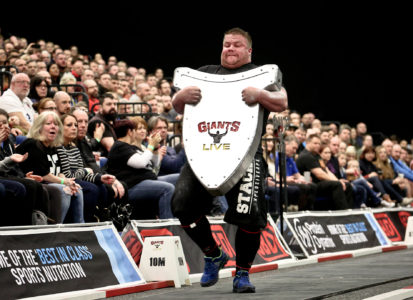 The opening event – the 200kg Shield Walk – may well show Terry’s prediction to be well-founded; Steele is the current record holder at 60m, which he set back in 2017, in Doncaster, and a similar performance in Sheffield will get his campaign off to a great start.

What are the events at 2022 Britain’s Strongest Man?

How does Terry see the results event by event?

“The Stoltman boys will smash the Shield Carry,” states Hollands “and so will Mark Steele.” Terry also believes that lesser known competitors Desmond Gahan, of Wales, and England’s Shane Flowers have the potential to perform well in this brutal opening event.

Of Adam Bishop’s chances – a man well known for his talent in moving events – he is more reticent: “This used to be a good event for Bish, but some recent performances have not gone to plan. This is why I have him third overall; he’ll loose a lot of points in this event.”

Holland’s blames the considerable size and weight Adam has packed on over the last few seasons for his lack of confidence in Bishop’s shield carry. But it will stand him in good stead in the Axle Deadlift, which is the second event. “Bish and Tom Stoltman are amazing deadlifters. Top 3 will be a toss up between Tom, Adam and Graham Hicks. Getting that one extra rep or making no mistakes will be crucial.”

Hollands is less confident about Luke Stoltman’s chances in the deadlift. “It’s a slight Achilles heel for Luke. He’s good enough that he’ll still place mid-table, but it won’t hurt him like it would at World’s, where the overall deadlifting standard is that bit higher.” 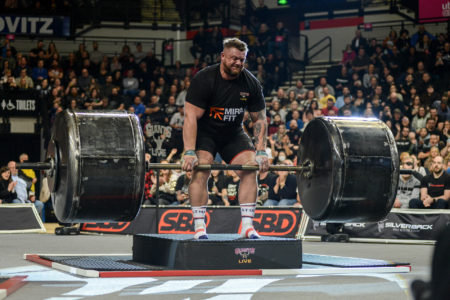 What points Luke surrenders in event two, he may well recoup in the axle press. Luke, and Tom, as well as Graham Hicks, are all acknowledged by Hollands as having tremendous shoulder power and each have a great chance of winning this overhead event, which is most commonly performed with a log.

“Sandbag Toss is a bit of an unknown,” admits Hollands, “though Tom Stoltman has proved in the last two World’s Strongest Man finals that his throwing ability, albeit with a keg, rather than a sandbag, is world class.” In an event such as this, which requires explosiveness as well as sound technique and an efficient application of power, Terry tips Adam Bishop and Luke Stoltman to once again figure prominently. “Adam will do well because he is so explosive,” says Hollands, “and Luke will do well because he is just so consistent at the moment.”

In the final event, the Castle Stones, Hollands can not see past Tom “The Albatros” Stoltman putting those massive, long arms to good effect, once again. “Tom is king of the stones. In my opinion he’s the best Stone lifter we’ve ever seen.”

Referring to the use of the heavier set, which may change the dynamics of this familiar event, Terry is confident it will only serve to make the current World’s Strongest Man even more dominant: “It will suit him even more as he has the ability to lift these crazy heavy stones (referring to Tom Stoltman’s world record 286kg (631lb) single stone lift). It will widen the gap even further than if it was the lighter set. Tom will easily win the stones. Bish and Luke will be solid and somewhere near the top.”

If experience has taught Hollands anything over the course of his long career, it is that anything can happen and that we must expect the unexpected. However, it is clear that Terry, like many others, acknowledges that in Tom Stoltman, Britain has an athlete that is capable of winning multiple World Strongest Man titles and he will be in no mood to relinquish the British title he won just four months ago.