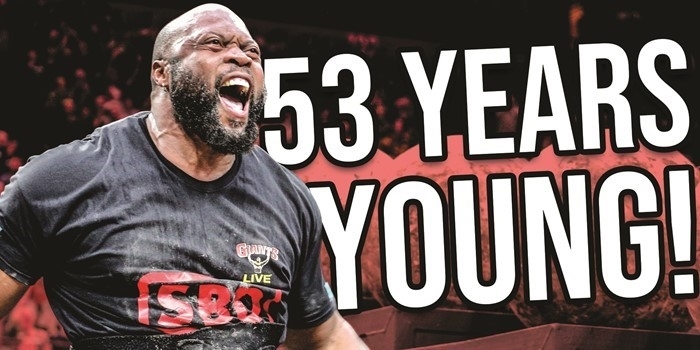 By day, Mark Felix is a 53 year old plasterer from Blackburn. By night, he is “The Miracle” - one of the World’s Strongest Men, competing internationally against guys half his age - and proving to us all that age really is just a number!

Felix tours as a professional strongman featuring in the line-up of the biggest strongman shows on the planet: the Giants Live World’s Strongest Man Qualifying Tour.

He has competed in front of audiences of 10,000+ across the UK, including at Wembley Arena this summer where he shocked the crowd by smashing the Hercules Hold World Record.

In this jaw-dropping strength stunt, the giant strongmen must take the weight of two gargantuan steel pillars weighing 350 kilos each, grit their teeth and hold on for dear life while the huge pillars pull them apart.

To give some context to Felix’s achievement, current World’s Strongest Man, 28 year old Martins Licis, was also competing at the Wembley event and took to the stage before Felix, holding the pillars for 50.94 seconds.

Felix, though, is known for his grip. He holds numerous grip-based world records and boasts unbelievably HUGE hands with a hand span of over 12 inches!

The Wembley crowd could not believe their eyes and jumped to their feet in celebration when Felix held on for an astonishing 83.62 seconds, setting a new world record in the event, defying senior stereotypes and showing that age is no barrier if you have the tenacity and dedication to succeed.

Youth is the gift of nature, but age is a work of art

While most strongmen start their strength careers in their 20’s, Felix didn’t even begin his professional strongman career until 2004, when he was already 38 years of age.

At 53, Felix has competed at the World’s Strongest Man final 14 times, placed third at Europe’s Strongest Man 3 times, and been a Britain’s Strongest Man medallist 6 times. But we’re sure the best is yet to come from the Benjamin Button of the strength world!

When asked for the secrets to his eternal youth, the softly spoken giant answered simply:“Have an open mind – try different things and don’t take things too seriously! Go with the flow, don’t stress and just be free!”

Witnessing this humble, hardworking athlete perform feats of strength on stage and remain competitive in this entertaining, cutting edge sport is nothing short of inspirational. Whether you are 10 or 100, once you see Felix in action, you’ll immediately see why he is so deserving of his nickname ”The Miracle”.

Don’t miss your chance to catch Mark Felix on the last show of the 2019 World’s Strongest Man Qualifying Tour on 7 September at Manchester Arena!