Giants Live held its first Arena show in Scotland at the Glasgow SSE Hydro Arena on 18 September 2021 and wow, we hope it won’t be our last!

After entering the stage to a standing ovation and the bagpipes of Scotland the Brave blasting through the Arena, of course it was the two Scottish Brothers who were set to steal this show. 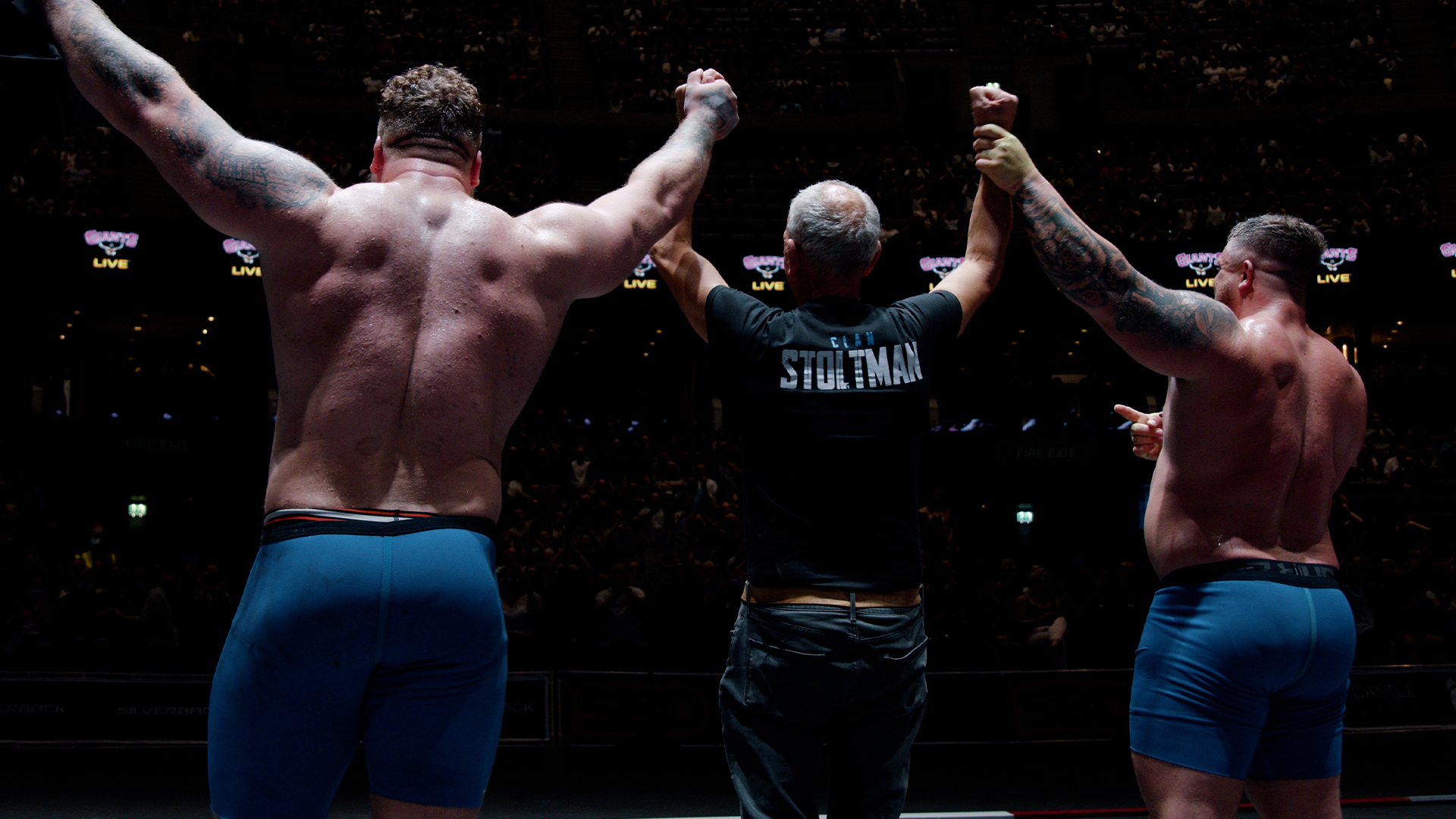 But before Event 1 of the World Tour Finals, a determined Iron Biby took to the stage to attempt the Log Lift World Record after severe travel delays scuppered his journey to the World Log Lift Challenge on 4 September.

There was not a dry eye in the house as Iron Biby made the 229kg lift and broke Big Z’s longstanding world record log press with an emotional dedication to his father.

Don’t miss out on all the strongman action! Watch the replay of the full show [here] for just £4.99!

A New World Record in the Nicol Stones Carry

Tom and Luke weren’t the only Scots competing on home soil at the World Tour Finals.

Andy Black, Scotland’s Strongest Man, had set a new World Record in the 252kg Nicol Stone Carry just a week prior. When his record was broken by American, Kevin Faires in Event 1 at the World Tour Finals, the crowd were behind Andy all the way as battled to take back his newly claimed record – but the Scot fell just short with a 21.86m carry, leaving Faires with the win and the world record on this event with an incredible 22.20m distance.

After the 252kg Nicol Stone Carry, a 150kg log press for reps, a 360kg Axle Deadlift for reps and a race with a 450kg car, it all came down to the stones to determine the winner.

Evan Singleton (USA) and Tom Stoltman were neck-and-neck going into the Castle Stones. The entire crowd gasped as both athletes fumbled on the fourth stone, making for a highly dramatic and unexpected conclusion to an intense evening of competition.

The slip up on the stones meant Luke Stoltman took first place with a total of 37.5 points, Tom Stoltman in second with 36.5 and Evan Singleton in third place just 3 points behind him.

If you missed this show, you can still watch the replay of the Live Stream by following the link below – with two world records, a spectacular atmosphere and such a dramatic finale, this is one to watch, that’s for sure!

Full results from the World Tour Finals 2021 can be seen below! 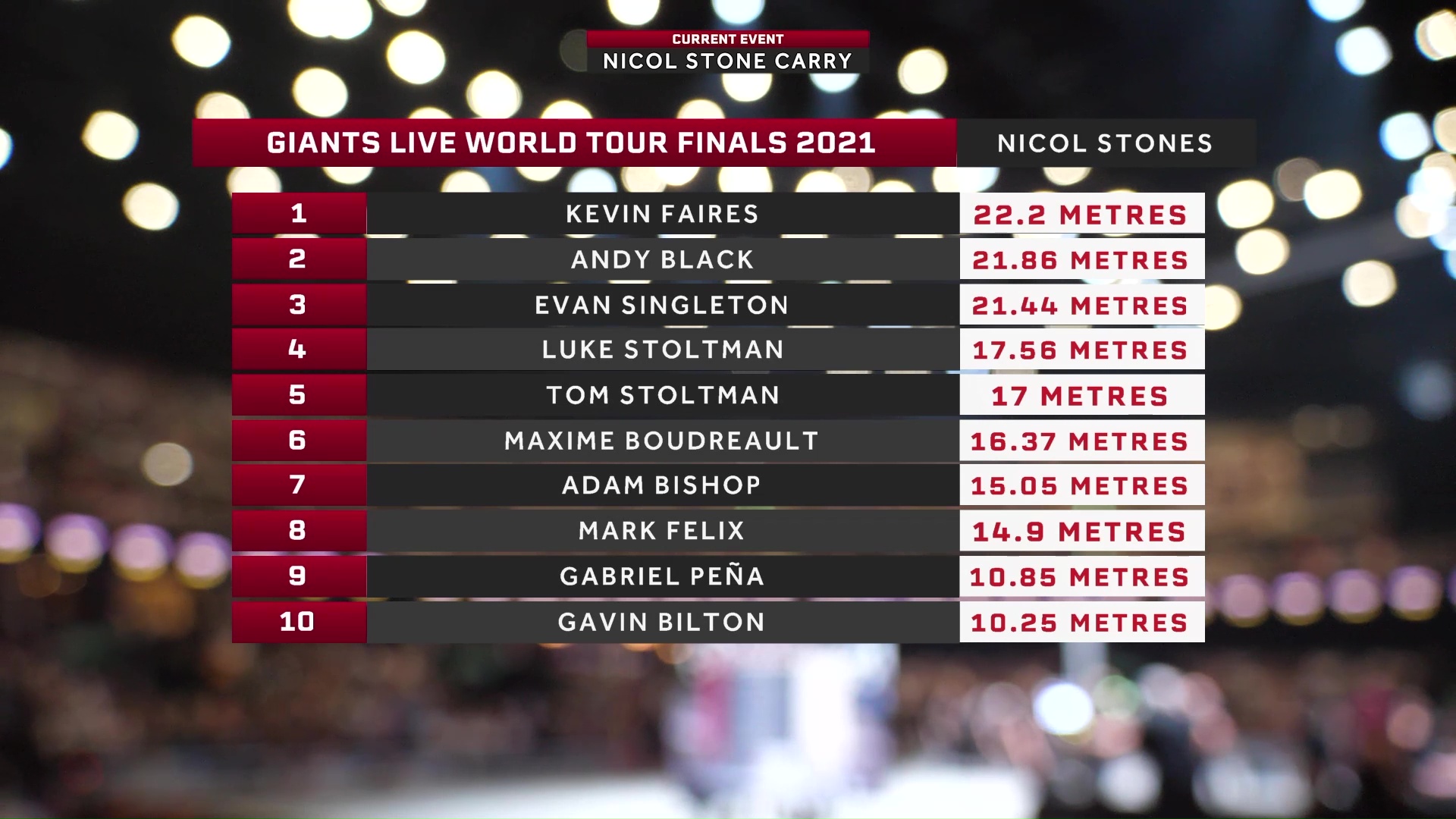 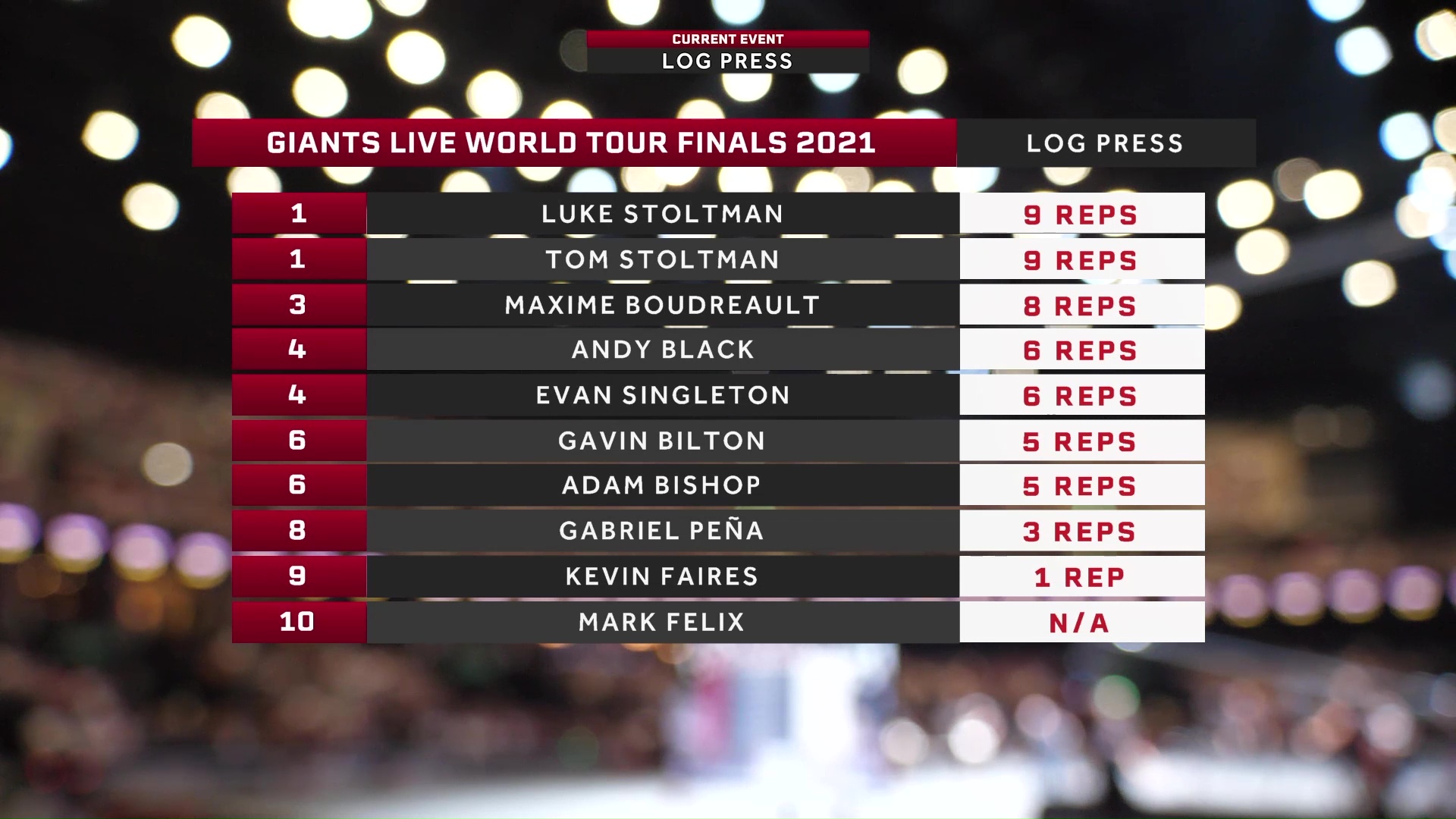 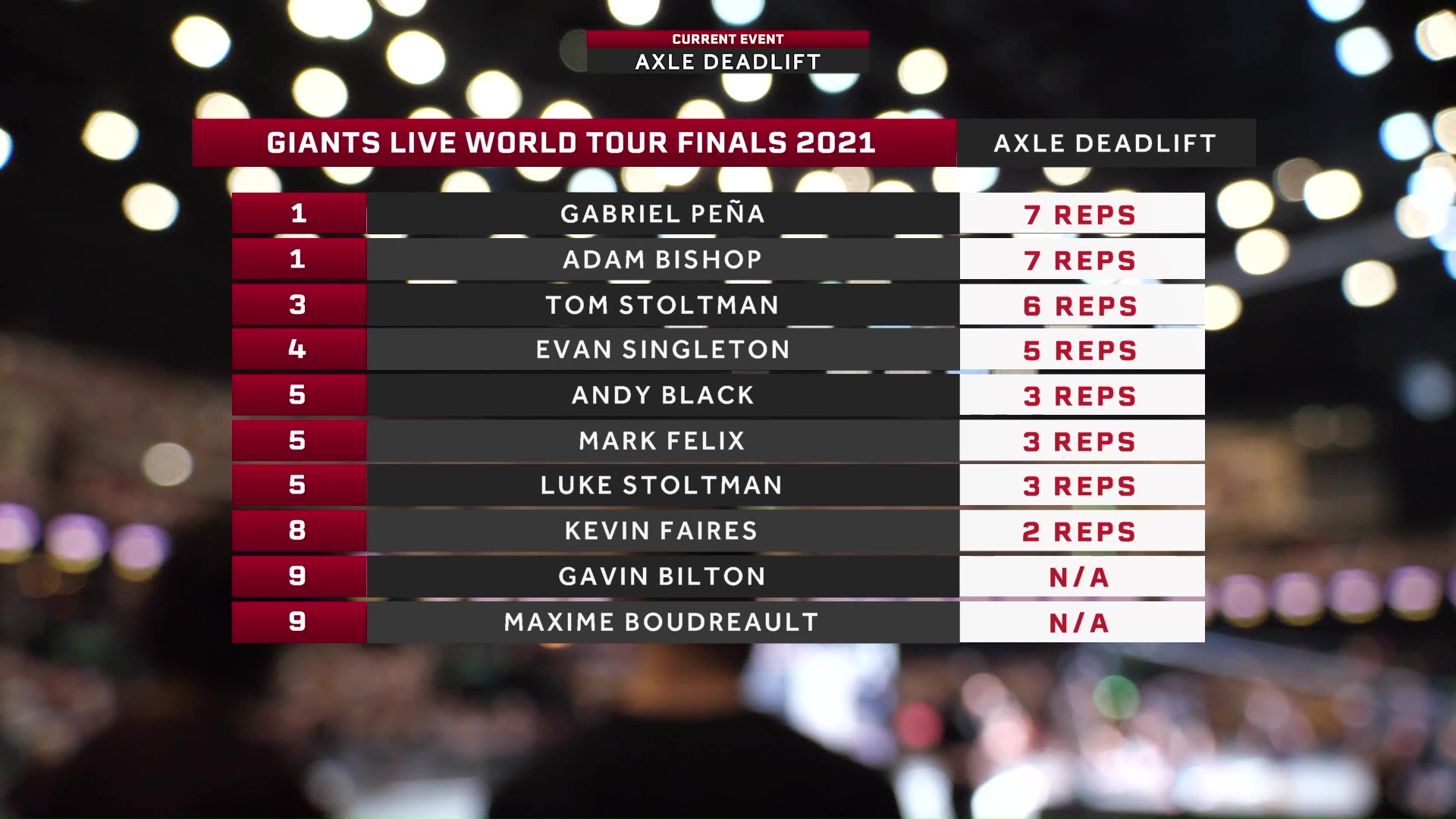 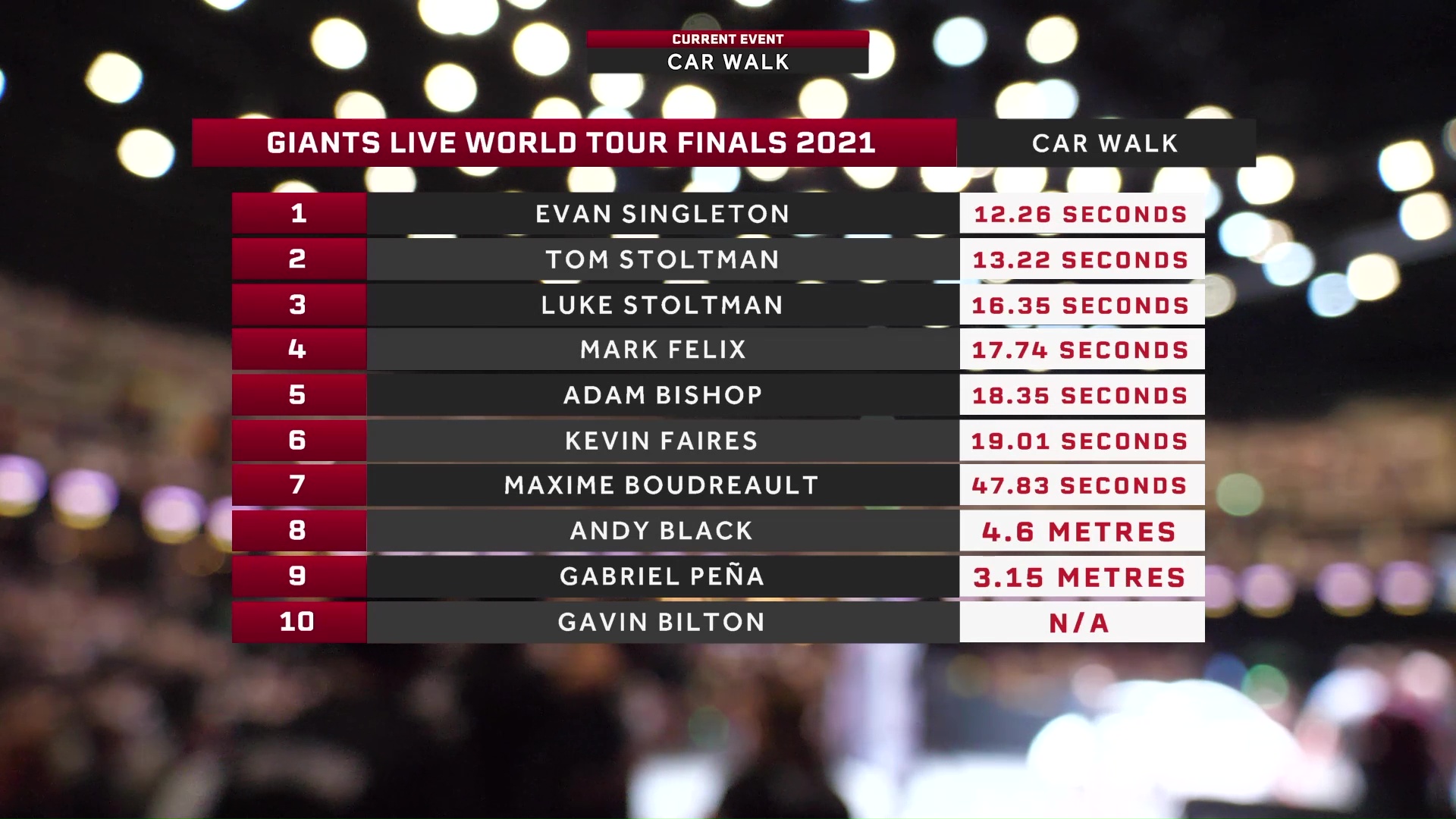 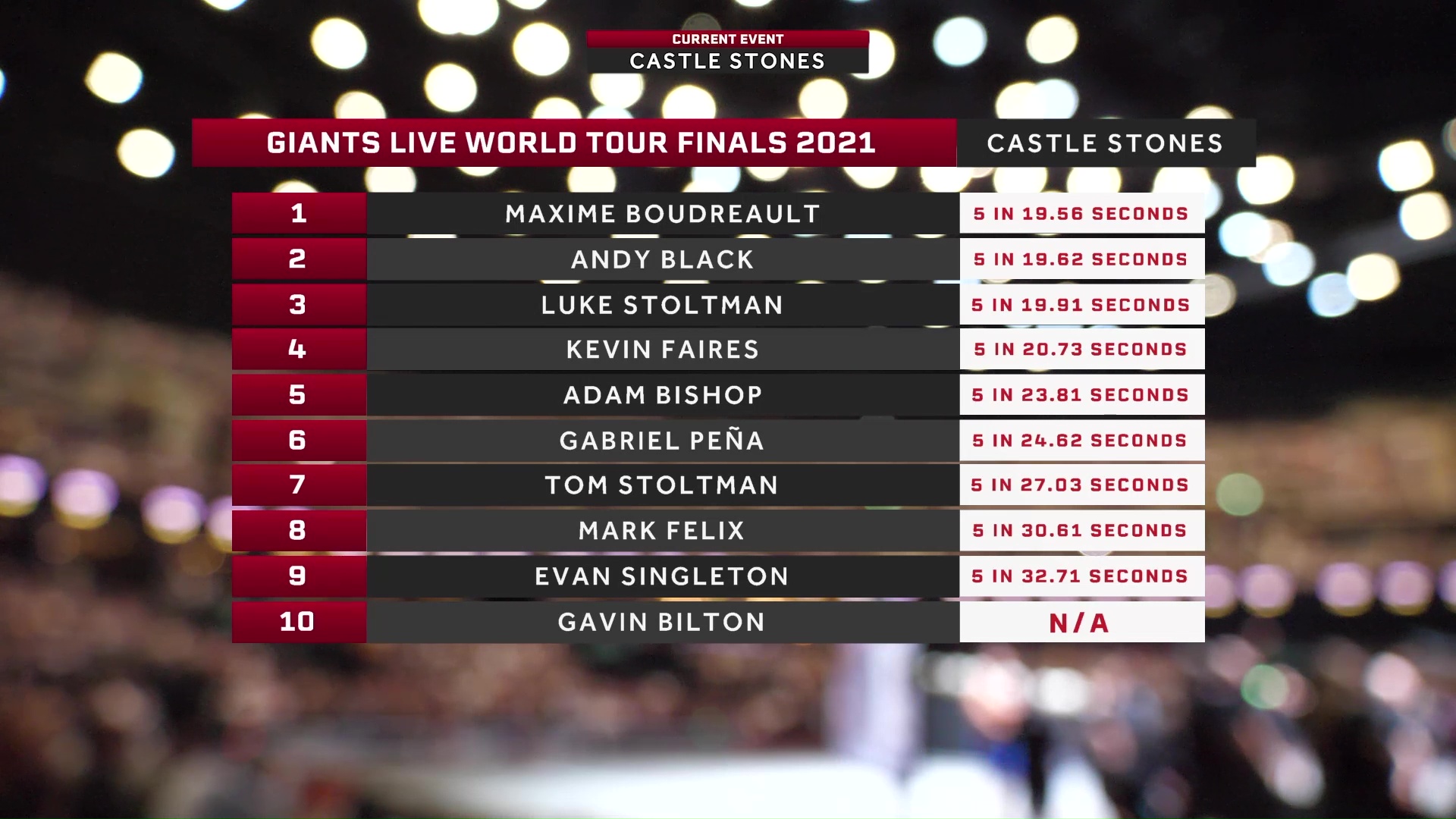 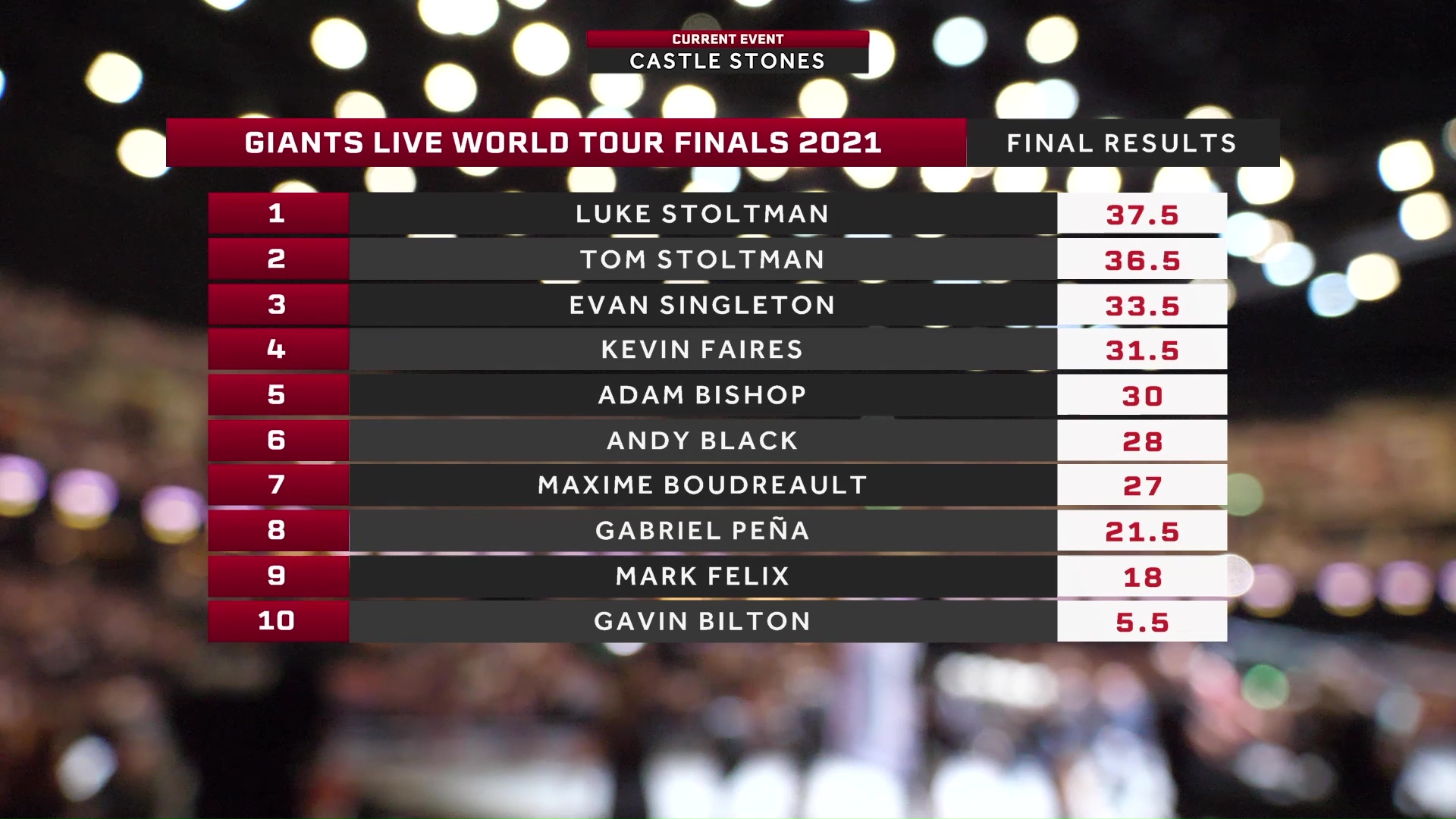