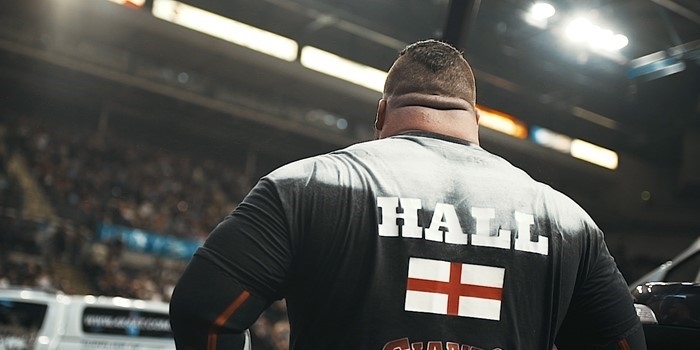 Events included deadlifts with a pick-up truck, a ‘Super Yoke’ race (where athletes race a 20m course with two motorbikes on their backs) and the traditional atlas stones.

The show was held at its new, bigger venue – Fly DSA Arena (former Sheffield Arena) - to a sell-out crowd of over 5,000 strongman fans.

Prior to the event, Eddie admitted to suffering from a few niggling injuries coming into the competition, but even at less than 100% the Beast managed to seal his historic fifth consecutive Britain’s Strongest Man win in true Eddie style.

“Hard work and dedication pay off. It doesn’t matter where you come from, what your background is. Work hard, keep your head down and you can achieve amazing things.” ~ Eddie after his win.

Hicks at his heels

Morecombe’s Graham Hicks, who only returned to competition circuit last year placed third at the event in 2017. This year, he was hot on Eddie’s heels with a very close call on the deciding event – the Atlas Stones.

“I’m silent but deadly, that’s what I’m going for. To be able to snap at the heels of Eddie Hall, who is such an incredible athlete - the World’s Strongest Man - is an honour”.

The more well known athletes were joined by some new and upcoming faces in the strongman scene, including Sheffield’s own Paul Smith.

At only 23 years old and competing in front of his home crowd, Paul managed to bag a record time on the penultimate event, the Hammer Hold.

In this gruelling event, athletes must hold a 30kg giant hammer at arm’s length for the longest time possible.

With a record time of 62.68 seconds, Paul proved that he is really is the man of Steel from the City of Steel, putting the World’s Strongest Man in second place for that event with a time of 58.19 seconds.

A close call for the podium

At the end of the competition, Terry Hollands and Adam Bishop were tied for third place – but, following strongman tradition, it was the athletes’ times on the Atlas stones that pushed Terry onto the podium.

Crowd favourite, Hollands, completely transformed his physique in the months leading up to the show, replacing the ‘power belly’ he was known for, with a rippling 6-pack that brought gasps from the audience when he ceremoniously ripped off his shirt at the end of the show.

Terry’s weight loss had critics wondering whether he still had it in him to place highly in the competition.

After the Super Yoke event, in which the athletes had to race a 20m course with two motorbikes on their backs, Terry admitted:

“My power is not quite what it was when I was bigger, so I have to make up for it in these speed events.”

The new, slimmed down Terry looked like he’d done a few rounds with Anthony Joshua by the time he took to the podium, sporting a shiner of a black eye after taking a tumble with a 160 kilo log during the first event.